During the month of August here in my home state of Victoria, Australia, the State Government holds a large small business festival. Seminars, workshops, webinars and other small business activities are organised through-out Melbourne and regional Victoria. Each year it gets bigger and better!

This year I attended the large event ‘Small Business BIG Marketing’ held at Melbourne Park last Thursday. Other than the 5.00am rise to catch the 6.30am train into the city, the day was fabulous. I was accompanied by a friend who is about to launch a new business and so she is going through that exciting time of planning, putting in the infrastructure to support her business and busily writing her systems, and I knew she would get a lot out of the day – and she did! 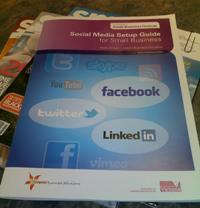 We arrived, registered, collected our showbag of goodies and grabbed a coffee in an attempt to thaw after the 20 mins walk from Richmond Station to Melbourne Park. On finishing the coffee we rummaged through the showbag to find my ‘Social Media Set Up Guide‘ was included. I had sold 2,000 copies (of my usually PDF guide) to Business Victoria and was thrilled with the final product. I’ve had comments from others saying it was the best value in the showbag.

The event ran from 8.00am until 1.00pm starting with networking and the exhibition of small business stalls. The day included four main speakers. All were inspirational. Ross Cameron spoke about ‘Running a Small Business – Why would you do it?’ and it boils down to “passion”; Tim Reid spoke about ‘How to Create a Brand’ and ’10 marketing initiatives to implement in 10 days’; Naomi Simson from Red Balloon discussed ‘The Ultimate Customer Experience’ but Simon Hammond’s presentation was the finale and boy was it a finale!

Simon’s presentation included a musician singing whilst playing the guitar in conjunction with video footage of which was either inspirational or moving. Simon’s message was ‘The Power of Belief’ in building a brand. Below is one of the inspirational videos he included. BE Brands: Belief, Belong, Behaviour Branding – the power of a great brand. If ever you get a chance to hear Simon speak, do jump at the chance!

I also suggest you consider attending this event next year where no doubt it will be bigger and better again!