“Social media has had a meteoric rise and a number of business owners have ridden the wave.” 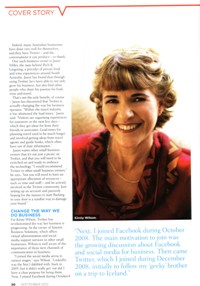 I had an exciting experience recently when I was tagged by a friend on Facebook to alert me to the fact I’d been published in the September Issue of the Nett Magazine, and it was the cover story! I had earlier responded to a call out by Source Bottle for business owners who’d had success with Twitter. I was interviewed by Gregor Stronach and subsequently included in a six page spread with a couple of other business owners. You can read the transcript below of the section of the article which I was included.

Change the way we do business

For Kirsty Wilson, Twitter has revolutionised the way her business is progressing. As the owner of Interim Business Solutions, which offers virtual administration and social media support services to other small businesses, Wilson is well aware of the importance of these new channels of communication t business.

“I joined the social media arena in various stages,” says Wilson. “LinkedIn was the first I dabbled with, back in 2005, but it didn’t really get, nor did I have a clear purpose for being there. Next, I joined Facebook during October 2008. The main motivation to join was the growing discussion about Facebook and social media for business. Then came Twitter, which I joined during December 2008, initially to follow my ‘geeky’ brother on a trip to Iceland.”

While she was getting her head around Twitter, and keeping up with her brother’s escapades in Iceland, Wilson had a real ‘light-bulb moment’.

“Twitter was the first [social media platform] to make sense.” she continues. “I found I was connecting with some amazing people from the word go, while following my brother’s trip, of course. Twitter then guided the way for me to really implement a successful strategy for both Facebook and LinkedIn. All three now complement each other perfectly, but they’re used quite independently and they’re certainly not the same.”

But while she enjoying positive results from Twitter – she says 43% of her leads come via Twitter, with a 47% conversion rate – she is very well aware of the limitations of the platform, and the need to ensure that the businesses using it do so in a fashion that won’t alienate potential customers.

“Whether or not I would recommend Twitter to someone depends on the nature of the business and the business owner,” says Wilson. “It’s great for service providers who work virtually. They can network and be seen with other virtual workers. These business owners ‘get’ the virtual space and the opportunities that are available to them.”

“Some just don’t get it and others just want to broadcast,” she continues. “Broadcasting doesn’t work – after all it has to be social. There is a reason why it’s called social media. I assist clients to get set up in the social media space for their business. I’ve seen some run with it and make it work for them and I’ve seen others drop off, either overwhelmed or because they don’t get instant gratification – they think it’s a waste of time.”

For the best results, Wilson recommends making sure that business owners understand not just the platform, but how it is meant to work. “It’s often likened to a cocktail party, she says. “You float around the virtual space, meeting, greeting and learning about others. You can build a great community, and source business alliances and clients. There are some fabulous tools to make tweeting more efficient and I’m a heavy user of ‘lists’ which supports my strategy.”

Have you had success with Twitter? We’d love to hear about your experience.